As President at Whitney & Company Realty Limited, HLCol Klugman is focused on building a strong and growth-oriented team that focuses on all aspects of Commercial Real Estate. HLCOL Klugman deals with a very large and diverse group of clients and she and her team have moved millions of square feet of space.  HLCol Klugman brings a multitude of experience and connections to her role as President.

​HLCol Klugman received an MBA from the Odette School of Business at the University of Windsor, a B.A. from Wilfrid Laurier University and the ICD.D designation from the Rotman School of Business and Institute of Corporate Directors, Directors Education Program.
HLCol Klugman makes her home in Kitchener, ON with her husband Iain. She has been on the board of a number of important community organizations including: The Humane Society of KW and Stratford Perth; Greater Kitchener Waterloo Chamber of Commerce, Physician Recruitment Task Force; International Women’s Forum Executive Member and Founding Chapter Member; KW Oktoberfest Inc., Past Board Member and Committee Chair; Chesley Lake Corporation Board Chair and the Institute of Corporate Directors SWO Chapter Executive and Founding Chapter Member.

HLCol Klugman has been an active member of the Royal Highland Fusiliers of Canada’s Regimental Council since 2012 and is honoured to become the first Woman HLCol within the history of the Regiment.​​​

Lieutenant-Colonel Coe enrolled in the Canadian Forces in 1988 as a Private with the Highland Fusiliers of Canada in Cambridge, Ontario. His career has also involved service with the Argyll & Sutherland Highlanders of Canada (Princess Louises’) in Hamilton, Ontario. LCol Coe has been employed at the 31 Brigade Battle School instructing on various courses from Basic Training to Driver Wheeled and has been employed within the 31 Territorial Battle Group as the Headquarters Company Commander and recently as the S1 Staff Officer.

Following completion of his Private (Recruit) General Military Training course in 1988, LCol Coe took a pause from service to complete his first year of university when he re-enrolled back into the Canadian Forces in 1990 as an Officer Cadet with the Argylls. He entered Infantry Officer training under the Reserve Entry Scheme Officer programme where he qualified Phase I and II and Commissioned as a Second Lieutenant in September 1990. Completing Phase III (Infantry) Officer, he was promoted to Lieutenant in 1992.

LCol Coe completed the Militia Officer Staff Course in 1995 and was promoted to Captain in 1996. He has held every command position within an Infantry Battalion including Platoon Commander, 2IC B Company, B Coy Training Officer, OC Headquarters Company, OC Depot Company, Operations and Training Officer, and Deputy Commanding Officer. Major Coe completed the Intermediate Tactics Course in 2001 and Infantry Dismounted Company Commanders’ Course in 2004. LCol Coe completed the Army Operations Course in 2009 and was promoted to his current rank in the same year. He became the DCO of the Argylls in 2012. In 2014, LCol Coe moved back to the Region of Waterloo to re-join the RHFC where he served as OC Headquarters Company. In 2015, he was appointed DCO. While in the role of DCO, LCol Coe was the President of the Officers’ Mess Committee and completed the 2-year Joint Command and Staff Programme at the Canadian Forces College in 2017. He is currently completing a Masters in Defence Studies (MDS) through Royal Military College of Canada and is expected to graduate in December 2018.

LCol Coe graduated with a Bachelor of Arts in Geography from McMaster University in Hamilton in 1993. After graduation he went to Australian Catholic University in Sydney, New South Wales, Australia to complete a Graduate Diploma in Education (Primary/Junior) and began his teaching career with the Waterloo Region District School Board in 1996 at Margaret Avenue Senior P.S. (Kitchener). He has worked at Trillium P.S. (Kitchener), Riverside P.S. (Elmira), Country Hills P.S. (Kitchener) and is currently a Special Education Resource Teacher (SERT) at Jean Steckle P.S. (Kitchener). LCol Coe holds teaching specialists in Computers in the Classroom and Special Education (Behaviour) with additional qualifications in the Intermediate Division and Ontario Principal’s Qualifications Part 1 and 2.  He has taught all grades from 4-8 including Kindergarten coverage. LCol Coe is married to his wife, Jane Coe and they have two teenaged children, Nolan, and Marissa Coe. They currently reside in Waterloo, Ontario.​ 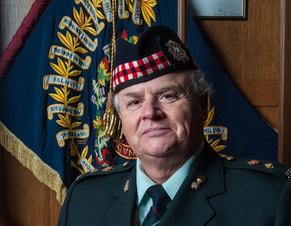 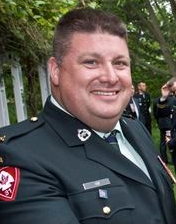 HCol Bernie Melloul was born in Tunisia in 1949. He immigrated with his family to France in 1957 and then to Canada (Waterloo, Ontario) in 1961. He attended Waterloo schools, graduating from Waterloo Collegiate Institute in 1969. His experience in the Construction Industry began in 1972 when he obtained his Diploma in Construction Engineering Technology from Conestoga College of Applied Arts and Technology. Ten years later he and Dave Blamey founded Melloul-Blamey Construction.

In 1993 he received his Canadian Construction Association Gold Seal Certification in Project Management and in 1999 he was honoured by Conestoga College with the Alumnus of Distinction Award. By the year 2000 Melloul-Blamey expanded and an office in Greenville, South Carolina was established. Bernie received the 2006 Ontario General Contractor’s Association Chairman’s Award of Recognition. In 2008 the Greater Kitchener Waterloo Chamber of Commerce named him Business Leader of the Year (+20 employees).

HCol Melloul has three children. Joel has taken over the role of President of Melloul-Blamey Construction. Nadine is also involved with the company and is married to Jeff Heimpel who is a Vice President. Natalie resides in England. Bernie is a proud grandfather of seven.